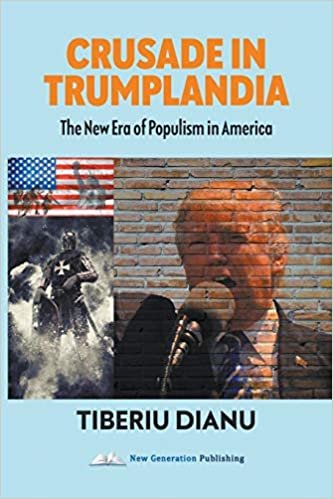 Crusade in Trumplandia: The New Era of Populism in America

The book is a collection of essays written between May, 2016 and October, 2019, about the transformation of America, which has turned from a united nation to one more divided than ever. Some pundits predict that, if things don't change, another civil war could occur. Have we reached a point of no return? Hopefully, America is mature enough to learn from its mistakes and avoid further scars along its evolving history. "Tiberiu Dianu is a specialist in law, politics, and post-communist societies... His latest book, entitled Trumplandia, is a welcome addition toward understanding current events, Washington's international policy, and the present American society; a society polarized and divided as it has not been since the Civil War... Mr. Dianu makes in-depth assessments of important events in today's America and achieves not only fine descriptions, but as an expert in the field, proves to have a "gut feeling" for them. For example, the author understands, and at the same time feels, the meaning of rising patriotism and nationalism as a shield against the not yet fully understood impact of globalization." NICHOLAS DIMA, Ph.D., Adjunct Professor and Research Associate, Nelson Institute, James Madison University, Virginia "For someone seeking to understand the rise of populist nationalism in the United States through its avatar, Donald Trump, one need look no further than Tiberiu Dianu's book, Trumplandia. ... Indeed, Trumplandia should be a welcome addition to any scholar, student or layman's library, especially in its international edition. If anyone loses sleep over its challenging assertions, then it will have been well worth it." ERNESTO MORALES HIZON, Ph.D. Candidate and former Fellow in American and Comparative Politics at Claremont Graduate University, LL.M. in International Legal Studies and former Fellow at American University, Washington, DC and Johann Wolfgang von Goethe University, Fellow at Augsburg University; Member, Integrated Bar of the Philippines

Save America And The World From Trump: 10 Reasons whyTrump should be defeated

I Am ARMY: It's Time to Begin

The Depthvale Detectives and the Great Education Crisis: A Guide to Contributive Learning in Schools

Education for Knowing: Theories of Knowledge for Effective Student Building

Eugenics and Other Evils Illustrated

Eugenics and Other Evils Illustrated

Dispute over the status and use of the waters of the Silala: (Chile v. Bolivia) order of 1 July 2016 (Reports of judgments, advisory opinions and orders, 2016)